Shots That Are Good for You?

Yes, it’s a thing. Back in the day, shots were just a quicker path to getting tipsy, if not wasted.

And then came energy shots, which somewhat did the job if you were willing to endure the racing heart and inevitable crash at the end.

So what’s with the better life in a bottle promised by these trendy new drinks? Could it be that something good for you is available in shot form?

That’s exactly what this recipe offers, actually. And for a heck of a lot less money than the cute little bottles, you may see at yoga class.

The idea is that you’ll be drinking in nutrients you otherwise might not get. The small size means you don’t have to choke down some big gulp-sized health drink to reap the benefits.

I mean, I appreciate greens and all, but I don’t particularly enjoy drinking salad. Just my opinion.

That’s why juice shots (or wellness shots, or nutrition shots, or whatever) are so handy. They’re super nutritious and easy to take, even if you don’t love the flavor.

Benefits of This Shot

Juice shots are typically marketed not by their contents, but by supposed benefits of drinking them.

This juice shot features kale, which is one of the most nutritionally dense foods on the planet. It’s a powerhouse antioxidant, and you’re going to reap the benefits of vitamins A, K, and C, to name a few.

Next up is celery. You may be surprised to learn that there’s more to it than crunch and water. Those stalks contain at least a dozen antioxidants.

As you’d expect, lemons contain a lot of vitamin C, earning lemon juice a spot in this health shot.

It also contains ginger, which boasts anti-inflammatory compounds called gingerols. A good thing to keep in mind, especially for those of you who work out hard or have achy joints.

Finally, some mint leaves and erythritol sweeten the shot and improve its palatability.

As you can see, there are a ton of benefits in a small beverage. And you don’t need to pay a fortune to reap the rewards.

Looking to create your own juice shots, but not sure what foods are Keto?

Consult this Keto diet food list. You’ll find more than 200 foods that are safe for your low-carb Keto diet. 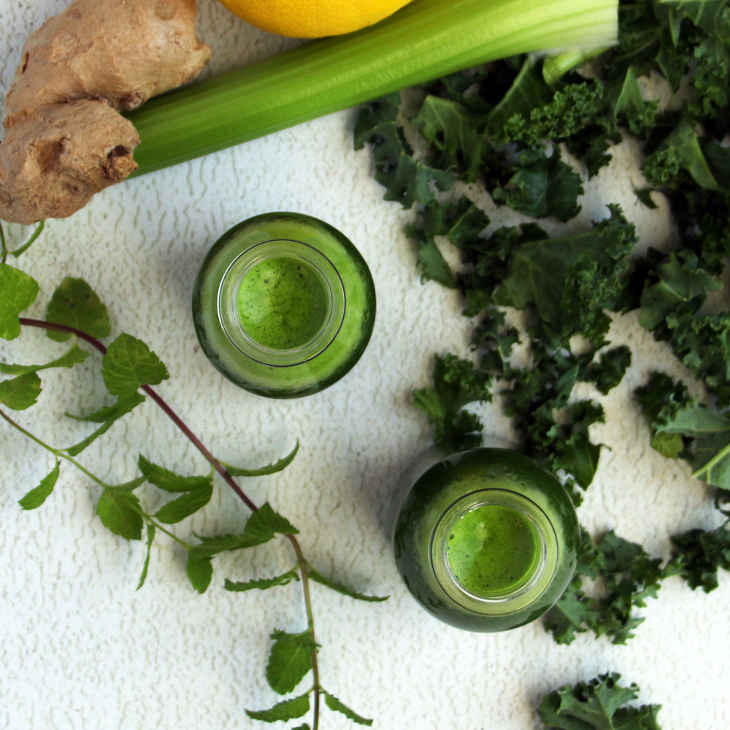 This shot is packed with nutrients sure to give you a boost.