Remember the golden milk craze of 2016? I know it’s hard to keep track, but I’ll get you up to speed on why you should be drinking it and share this keto golden almond milk recipe.

What is Golden Milk?

Just like fashion trends, food trends come and go. Some are deep fried, heart attack inducing pseudo-foods, while others are more hype than substance, and occasionally there is something we can all benefit from.

Golden milk is in the latter category. Hardly a new idea, golden milk follows the ancient tradition of using turmeric for healing.

In fact, turmeric has called on to cure various ailments for some 4,000 years. That’s a pretty solid testament that it’s been helpful for many people.

But what is it doing in milk?

Golden milk is a Westernized adaptation of Indian haldi doodh, aka turmeric milk. The milk was really just a means of delivering the turmeric and its anti-inflammatory benefits. In fact we created our own Turmeric Soothe supplement to maximize these benefits!

Typically Americans will throw some sugars and other spices in the mix to make it tastier. Not surprising, given our addiction to heavily flavored coffees.

Since this version is keto, you’ll use unsweetened almond milk as a base instead of dairy milk. Here is a list of other dairy substitutes for keto.

To each their own, but I chose to keep this keto almond milk recipe simple. I added just one curveball ingredient: collagen powder.

First of all, let’s back up and talk about what collagen is. In short, it’s the most common protein in the body. It’s found in skin, tendons, muscles, and bones.

As we age, collagen levels shrink. A number of other factors can hasten their departure, including autoimmune problems, sun damage, smoking, and high sugar consumption.

Many are touting the benefits of collagen consumption, and it certainly seems reasonable that it could have positive implications. However, I will say that more studies need to be done to be sure.

Here are some of the possible health concerns that could benefit from collagen:

Ready to try it? We love CoBionic collagen peptides.

If you’re wary of using collagen powder, there are foods you can eat to naturally increase the amount of collagen in your body. These include:

Finally, if you’re vegan feel free to omit the collagen powder in this recipe.

How to Enjoy Golden Almond Milk

While of course, you can drink it as prepared, warm and comforting, you can also use it in combination with other drinks.

Make it into a latte by adding in a shot of coffee.

You can also make tea by seeping a black tea bag into the golden milk for two minutes. 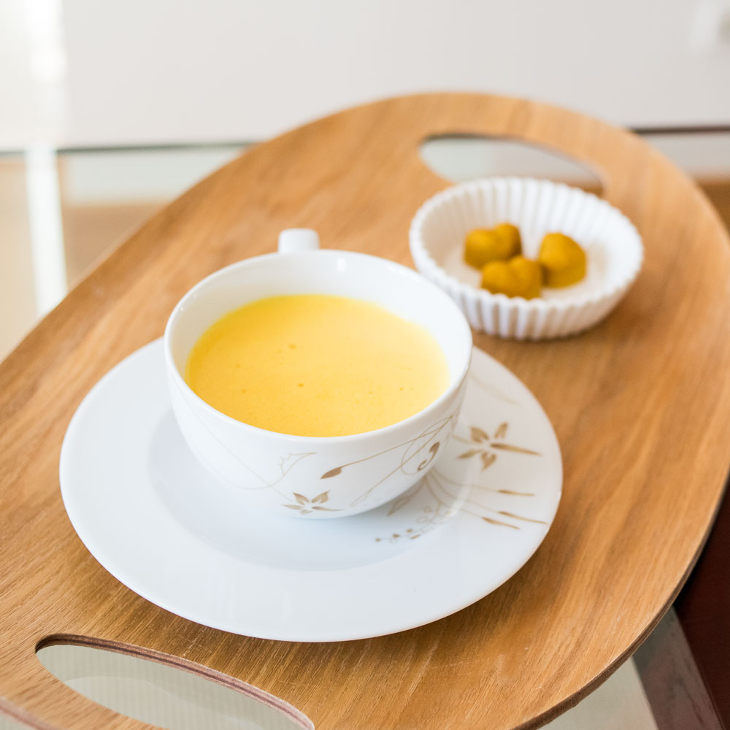