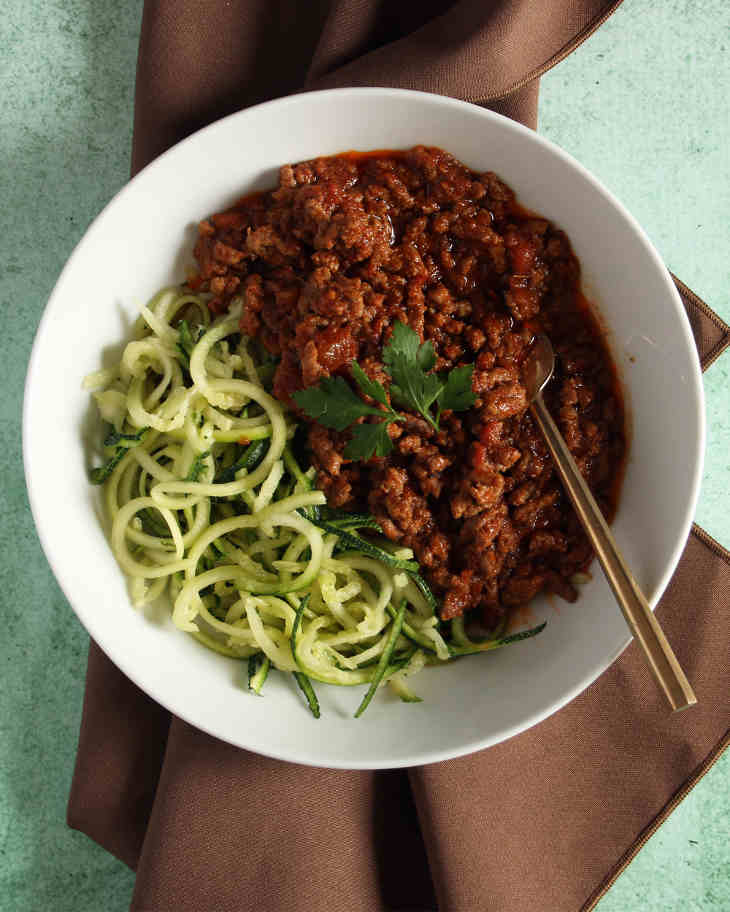 When it comes to satisfaction and comfort, it’s hard to beat a nice big bowl of pasta with tomato sauce. If you are following a Keto diet, wheat pasta may be a thing of the past but that doesn’t mean you can’t enjoy pasta at all. For example, take this recipe for Keto bolognaise and zoodles. The bolognaise is a hearty stew-like tomato sauce, packed full of flavor and ground beef. Plus, it uses beef broth to add even more satisfying beefy flavor to every bite. The zucchini noodles are the perfect vehicle for this meaty sauce. This meal would be excellent as an easy main for a casual dinner party. The sauce is so flavorful that even your non-Keto friends will be going back for seconds.

What is Bolognaise and Where Does It Come From

It is probably no surprise to you that bolognaise sauce comes from Italy, but did you know that Italian bolognaise and American bolognaise bear little resemblance to each other?

The first record of bolognaise dates back to 19th century Italy, right outside of Bologna. The sauce known as ragú alla Bolognese, or just ragú, is primarily made from beef with sautéed garlic and onions, and a little bit of tomato paste. Traditionally, milk is also added to give the sauce a creamy taste and texture.

In America, bolognaise sauce refers to nearly any tomato-based sauce with ground beef, and occasionally ground pork, added. The Italian dish it most closely resembles is not the ragú alla bolognese but the ragú alla napoletana, which includes more tomatoes than the version from Bologna.

Easy Additions to Mix Up Your Bolognaise Recipe

Some people say that there as many variations of tomato sauce as there are people to cook it. As someone who is always trying out new flavor combinations in recipes, I would agree. Read on for a few ingredients to mix up the flavor of your sauce without adding a ton of carbs.

One of the best things about zoodles is that just like wheat pasta, they take on the flavor of the ingredients they are cooked and served with. With so many different preparations, the world is your oyster. Read on for just a few suggestions on the many different ways to enjoy zucchini noodles.

We love a good bolognaise and know you (and your guest) will too!