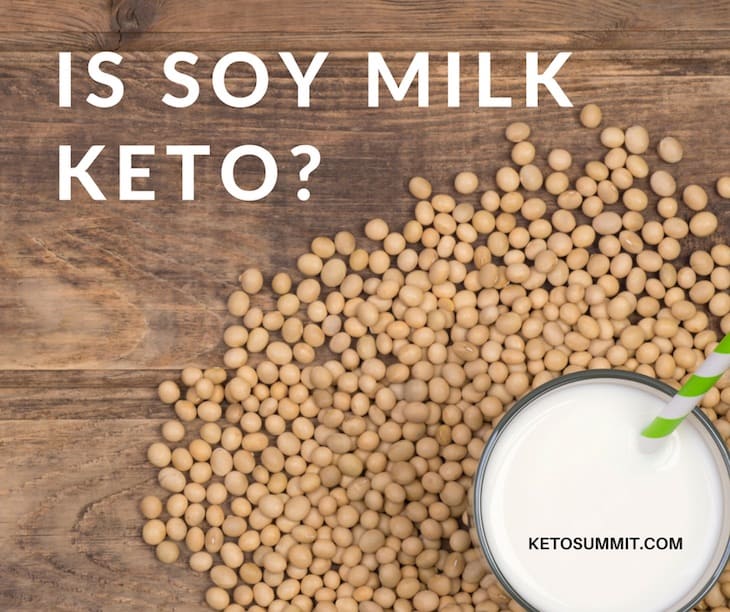 So, does that mean this dairy alternative is Keto? Can you add it to your Keto smoothies and coffee?

We’ll cover these subjects and more. Read on!

Soy milk is not Keto.

While unsweetened varieties are low in carbs, that doesn’t mean it’s good for your health, unfortunately.

There are healthy and unhealthy foods you can include in a Keto diet. And while consuming unhealthy low-carb foods will put you into ketosis, it’s not the best way to look after your body in the long run.

So if you want to follow a healthy Keto diet and heal your body while you’re burning fat…?

Leave soy milk out of your Keto diet.

Why are we being so down on soy milk? Will it kick you out of ketosis?

Will Drinking Soy Milk Kick You Out Of Ketosis?

Let’s take a look at the macros…

What are net carbs?

In general, they’re the carbohydrates in a food that your body actually absorbs.

As Dr. David Perlmutter, M.D. explains, “Fiber, it turns out, is a form of carbohydrate, but is not a carbohydrate that has any effect on blood sugar or insulin response.”

Your body can’t absorb dietary fiber – and there’s 2 g of fiber in each serving of soy milk. You can subtract fiber from the total carbs listed on a nutrition label.

So with 4 g of total carbohydrates, subtract the 2 g of fiber and you’ll get 2 g of net carbs.

So, does soy milk affect your ketone levels?

Probably not. Given that it is pretty low in carbs, it’s unlikely to affect your ketone level much if you’re just adding a small amount to shakes, smoothies, coffees or tea.

Just because it won’t kick you out of ketosis doesn’t mean it’s healthy for you!

Here are a few reasons why soy is bad for your health:

Processed foods can make our lives a lot easier, but soy milk unfortunately creates a lot of problems.

First of all, the processing concentrates the most harmful parts of soybeans – the parts that disrupt your hormones and irritate your gut, which we’ll get to in a moment.

The processing of soybeans also involves exposure to a solvent called hexane. (2) Hexane is a neurotoxin that is most dangerous when inhaled, but probably isn’t great for you when ingested either.

According to the Cornucopia Institute, a organization that investigates agricultural and food issues, “…[Hexane] residues – ten times higher than what is considered normal by the FDA – do appear in common soy ingredients.” (3)

And if you’re worried about genetically modified foods or pesticides, then you should really beware of soy products! Almost all soybeans are genetically engineered and herbicide levels are very high. (4, 5)

It could mess with your hormones

Soybeans contain phytoestrogens, which are a type of plant hormone which is structurally similar to estrogen and which can bind to estrogen receptors in the body. (6)

It’s not clear exactly what kind of long-term effects this might have on your hormones. The research on this is contradictory – some studies show that soy increases the effects of estrogen, while others show it actually lowers them. (7)

To be fair, not all of these effects are bad.  Some studies linked soy consumption to slightly lower breast cancer risk and reduced menopause-related hot flashes. (8, 9)

But for better or for worse, soy seems to be having an effect on hormones for some percentage of the population.

But do we really want our food telling our endocrine system what to do? Hormone disruption can have downstream effects on everything from your immune system to your bodyweight.

If you’d like to avoid unwanted or unintentional effects on your hormones, it’s best to avoid soy.

There are problematic substances in soy milk called phytates and lectins.

They’re found in many grains and legumes as part of the “defense system” which plants use to stop themselves being eaten.

Soybean lectins can cause inflammation and leaky gut syndrome. (10)

They can interfere with nutrient absorption and disrupt the balance of your gut bacteria. (11)

Phytates, or phytic acid, are just as troublesome.

Which is why you’ll hear phytates referred to as “anti-nutrients”.

And again, these phytates and lectins more concentrated in soy milk than soybeans.

So, Is Soy Milk Keto?

In case you skipped to the end of the post without reading the rest of it, here’s the bottom line again:

Soy milk is not Keto.

A small amount isn’t going to kick you out of ketosis, but it’s not great for your health to be drinking soy milk regularly.

There are other keto-friendly alternatives to dairy you can use instead (which are much more healthy).

Coconut milk is made from coconut “meat” (the white part of a coconut).

What are the macros for coconut milk?

So it’s a healthy low carb alternative to soy milk.

Almond milk is easy to make at home or to purchase in various grocery or health food stores (in the US).

If you want to try making it at home, soak almonds in water overnight. You can soak them for up to two days for ultra-creamy milk.

Then, drain and rinse the almonds, and grind them with fresh water using either a blender or food processor.

Lastly, strain the milk to get rid of the almond pieces and store in the fridge. Your milk will last for a few days.

What about the macros for almond milk?

A cup of unsweetened almond milk contains just under 1g of net carbs. (14)

That’s why almond milk is another healthy, low-carb alternative to soy milk.

What About Other Soy Products?

Soy milk is out, but what about other soy products? Are they keto-friendly? 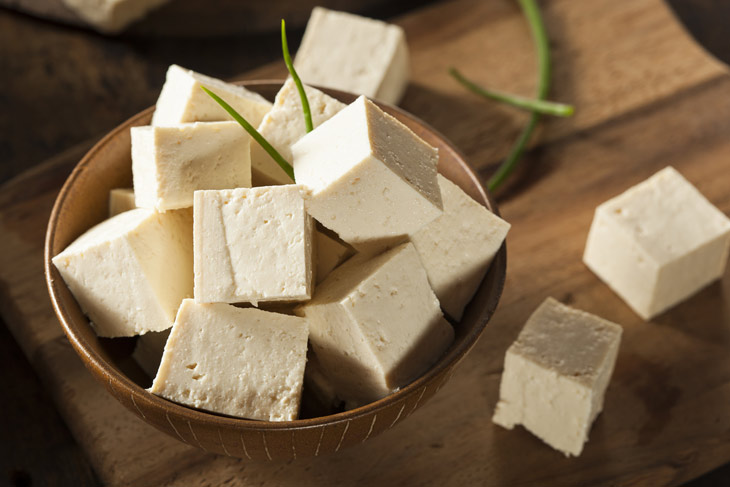 Tofu is actually made from soy milk – which may come as a surprise!

And that means you should avoid tofu for health reasons, even if it only contains 0-1g of net carbs per 100g serving.

It’s a very concentrated form of soy, so the same problems we listed above for soy milk apply here. 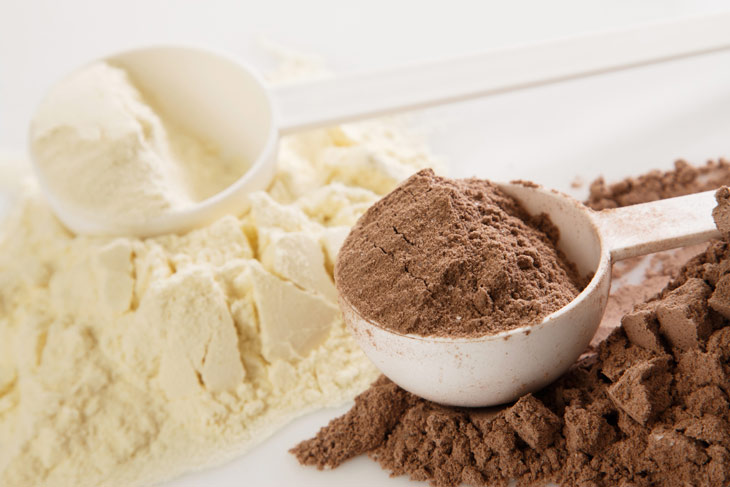 Soy protein powder is made from dried, defatted and dehydrated soybeans.

Again, it’s highly processed, and given the number of other much healthier ways to increase your protein intake (like eating a steak!), it’s best avoided on Keto. 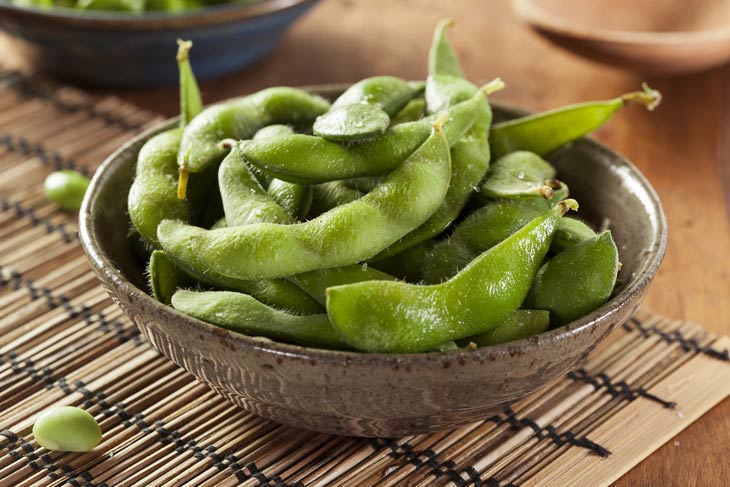 Edamame beans are young soybeans in the pod.

While processed soy can be problematic for your long-term health, whole or fermented products can actually be beneficial for your health.

So, edamame beans are keto-friendly in small amounts.

There’s 5g net carbs per 100g of edamame beans, so you definitely won’t want to eat too many. 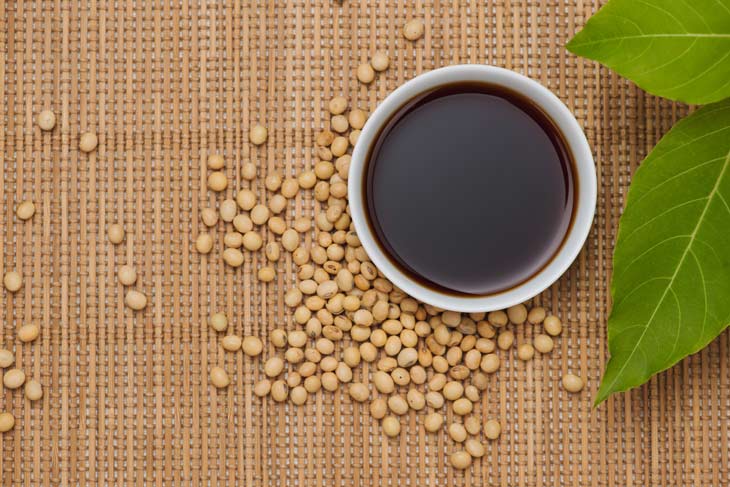 Most brands of this traditional Asian condiment are off the menu because they contain gluten.

Traditionally, soy sauce is made simply by fermenting soybeans. The fermentation gets rid of most of the problems with soybeans.

However, nowadays, wheat is usually added to the soybeans. But you can still find wheat-free and gluten-free varieties.

Look for brands labeled “gluten-free” – these are keto-friendly.

And if you want to go completely soy-free…then go for coconut aminos.

And they have a rich flavor which is a mix of savory and sweet.

The general rule is to avoid soy products where possible with the exception of whole or fermented soy.

Don’t make soy milk or tofu a regular part of your Keto diet, but feel free to add in gluten-free tamari sauce and edamame beans for more variation and flavor.

So, don’t just look at the carb count in a food. Figure out how that food affects your body, mind, and health long-term.

That’s the solution for ensuring you get healthy and stay healthy life-long.