Is Popcorn Allowed on Keto?

Picture this: you’re at the movie theater, waiting to see that movie that everyone’s raving about when it happens.

And the delicious smell of buttery, salted popcorn wafts by your nose.

Some movie-theater popcorn sure would hit the spot right now…and it would give you something to munch on during the commercials. After all, what’s a movie without popcorn, right?

It can’t do that much damage, can it?

When you’re on Keto, prepping meals and calculating your macros is just part of the battle.

Since the Keto diet is focused on macros rather than calories, you might think you can get away with a few handfuls of popcorn…you’re good so long as you keep your net carbs down to below 25 grams a day, right?

Today, I’m going to walk you through the nutritional profile of popcorn so you can see where you stand, and I’ll also show you some alternatives so you can still enjoy a tasty treat when you’re at the theater or curled up in front of the tv at home, or just out and about. 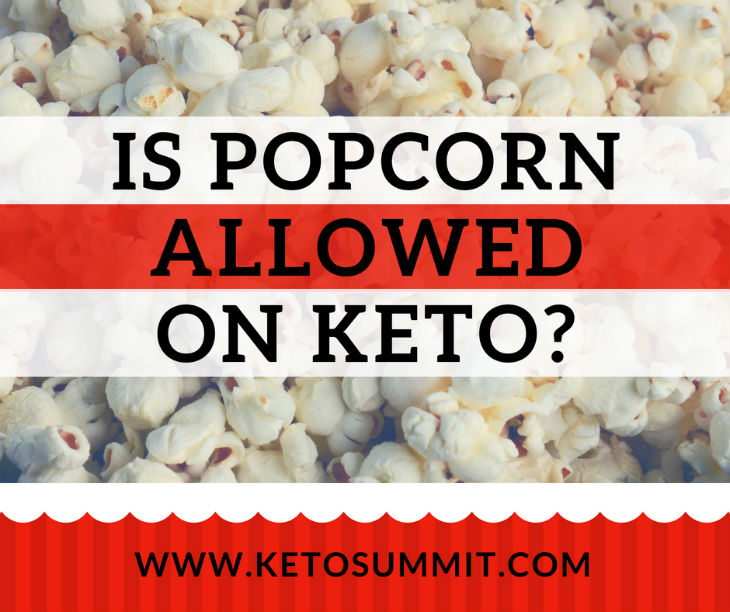 If you’re just dipping your toes into the Keto diet, keep a few general pointers foremost in your mind when you’re looking at the viability of snack foods…

Popcorn is a grain. In particular, it’s a variety of corn kernel with a hard outer shell. When heated, the moisture within the kernel turns to steam and expands, increasing the pressure inside the grain and causing it to pop. 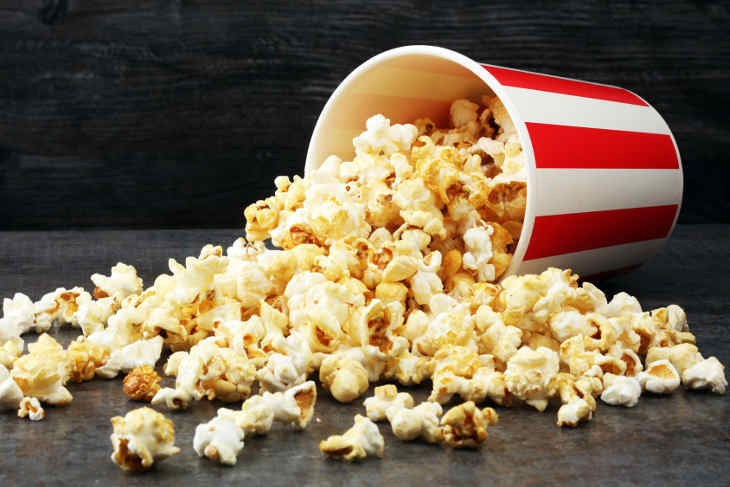 When it pops it essentially turns inside out and revealing the white fluffy flakes we’ve come to know as popcorn.

There are 3 main parts to the popcorn kernel:

Since popcorn can be low in calories (3), is it OK to wolf some down on Keto?

While nothing should be off-limits in the tiniest quantities, it’s not a smart move to overindulge on popcorn if you want to hit your macros.

Although it’s low in calories, there are 3 main reasons for steering clear of popcorn if you’re following Keto:

Popcorn is a Grain

Since most grains are high in carbs, they are not recommended when you’re on Keto.

According Gina Nguyen, M.D. following a ketogenic diet involves giving a pass to grains. “Foods that are high in starch and carbohydrates, as well as factory raised protein sources, should be avoided whenever possible.”  This includes, “all types of grains and starch (rice, oats, wheat, corn, potatoes).”

Popcorn is a grain, and it’s this density of carbohydrates that brings us to the main reason that popcorn is not Keto-friendly…

While popcorn is generally low in calories, when you’re counting your macros it’s the carb content that’s a killer.

A single cup of air-popped popcorn contains a whopping 5 grams of net carbs (4). This amounts to your entire daily allowance in as little as 5 cups.

This number of carbs does not present a problem for someone following a regular diet since it would only make up a small percentage of their daily carb allotment. On Keto, though, popcorn is simply too carb-rich to make a wise snack food.

Popcorn also has another hidden drawback for Keto followers…

Sugar and Preservatives in Popcorn

You should avoid processed foods as much as possible.

Most commercial popcorn is laced with artificial colorings and flavorings and also preservatives.

Many types of popcorn also have far too much sugar. You can find plenty of low-fat popcorn with only trace amounts of sugar, but caramel popcorn can have as much as 16 grams of sugar per ounce (5).

Since you want to slash your sugar intake on Keto, this is just one more reason to rethink your movie snack food if you want to stay on track with your macros and remain in ketosis.

With that in mind, we’ll wrap up today by showing you some mouth-watering alternatives to popcorn. 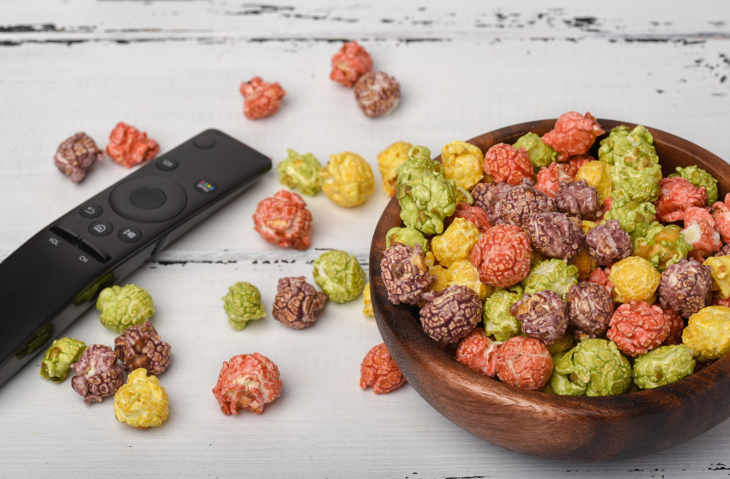 If you’re adhering to the Keto diet, you should feel less inclined to snack as you’ll feel fuller for longer (6).

If you do feel peckish between meals and you’re disappointed that popcorn is off-menu, what options are at your disposal?

When you’re deciding what snacks mix well with Keto, think in terms of your macros.

If you keep these pointers in mind and you’re on line to hit your macros, you can enjoy a little leeway with snacking.

We’ll round out today by pointing you in the direction of 3 superb recipes if you want to sidestep carb-rich popcorn.

You’ll be surprised that cauliflower can stand in for popcorn!  And there are added reasons to make the swap. Registered Dietitian Brianna Elliott, RD says, “It is a great source of nutrients, including a few that many people need more of. Plus, cauliflower contains unique antioxidants that may reduce inflammation and protect against several diseases, such as cancer and heart disease.” 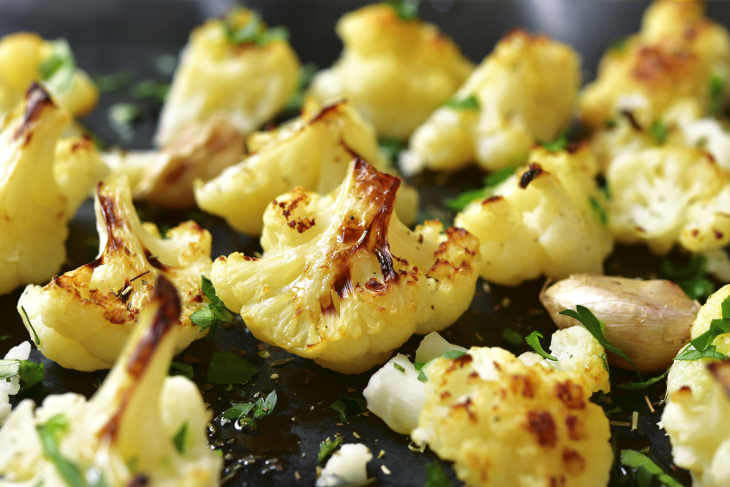 Popcorn is not your friend if you’re following the Ketogenic diet.

Made from corn and far too high in carbs, a 3-cup serving of popcorn packs more than 15 grams of net carbs. Eating it would quickly push you up to your daily limit.

Your aim with Keto should be to eat as many whole, unprocessed foods as possible. Packs of microwave popcorn are riddled with artificial coloring and flavoring. They also contain vegetable oils and, often, sugar.

The bottom line is that popcorn does not align well with a low-carb Ketogenic diet, so roll with some of our alternative suggestions instead and you’ll have an easier time sticking to your macros.

The good news is, sticking to a low carb diet often means you’re not all that hungry between meals anyway.  Dr. Andreas Eenfeldt, M.D. says, “Snacks are not really needed on low carb, as the hunger should go away when doing it right. If you’re still hungry, you may want to add more healthy fat to your meals.”

Please pin the image below so that you and others can quickly and easily refer to the list and find out the keto diet truth about this low-calorie snack.

We’ve got recipes for Keto granola, donuts, fries, chips, crackers, and more over on our Keto Snacks Recipes page. These tasty treats will fill that crunchy craving for sure!